The Emmy-nominated documentary film Brooklyn Castle is being re-released this Friday, March 5, 2021. 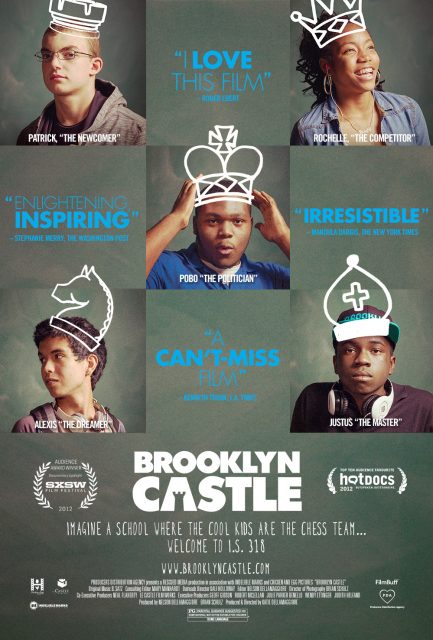 BROOKLYN CASTLE tells the stories of five members of the chess team at a Title 1 – below-the-poverty-line – inner city junior high school that has won more national championships than any other in the country.

To celebrate, Soledad O’Brien will host a panel discussion with Rochelle Ballantyne and Pobo Efekoro (students in the film), as well as Elizabeth Spiegel and John Galvin (teachers from the film) on March 5th at 8pm ET following the nationwide re-release. Soledad will discuss the power of chess, teaching, and defying the odds.  Visit http://brooklyncastle.com/ for theater listings, streaming options, and more information.

Or rent the film right now for $1.99 (and up) from:
Amazon Prime Video: https://www.amazon.com/Brooklyn-Castle…/dp/B00BB1VDLC
YouTube Movies: https://www.youtube.com/watch?v=wYA98pBGqZA

Or stream online for FREE with participating Library Cards or University IDs at Kanopy: https://www.kanopy.com/product/brooklyn-castle

Masterminds is an exhibition that tells the stories of notable chess prodigies including Bobby Fischer, World Chess Champion Magnus Carlsen, and the Polgar sisters. Through photographs, videos, and mementos of important chess matches and tournaments from the collection of the World Chess Hall of Fame, viewers will learn more about these talented young players as well as their later accomplishments. The exhibition will also highlight the achievements of players who took up the game later in life and still made a mark on the world of chess.

“Unlike many other fields, in chess, kids can sometimes compete with—and defeat—adults,“ explains Emily Allred, curator at the World Chess Hall of Fame. “Whether we’re exploring the real-life story of Tanitoluwa (Tani) Adewumi, an eight-year-old Nigerian refugee who won the K-3 New York State Championship only a year after beginning to play the game, or fictional chess prodigy Beth Harmon from The Queen’s Gambit, the genius behind these chess prodigies is truly awe-inspiring.”

A virtual tour of the exhibition will be available on WCHOF’s YouTube and Facebook channels.  The exhibition runs through November 7, 2021.

The U.S. Chess Center congratulates our newest, history-making and chess-playing Madam Vice President, Kamala D. Harris, who has frequently mentioned learning chess from her “Uncle Sherman” as a formative part of her childhood.

Kamala Devi Harris is an American politician and attorney who is the vice president of the United States. Harris served as a United States senator from California from 2017 to 2021, and as attorney general of California from 2011 to 2017. Born in Oakland, California, Harris graduated from Howard University and the University of California, Hastings College of the Law. She began her career in the Alameda County District Attorney’s Office, before being recruited to the San Francisco District Attorney’s Office and later the City Attorney of San Francisco’s office. In 2003, she was elected district attorney of San Francisco. She was elected Attorney General of California in 2010 and re-elected in 2014. Harris served as the junior United States senator from California from 2017 to 2021. Harris defeated Loretta Sanchez in the 2016 Senate election to become the second African American woman and the first South Asian American to serve in the United States Senate. – Wikipedia

“Uncle Sherman” was Sherman L. Williams, an attorney and Harris family friend, who was married to Dr. Mary Agnes Lewis (“Aunt Mary”). Vice President Harris spent many evenings at their home where Uncle Sherman taught her chess and inspired her to pursue a career in the law.