The qualifying tournaments were held this past Saturday, May 22nd, outdoors on the Catholic University campus. Organized by DC Chess League Scholastic Coordinator Robin Ramson and directed by David Mehler, ten players braved the sunshine and cicadas for a morning of excellent competition.

Mrs. Ramson announced the DC All-Girls tournament will be held at the same location on June 5, and that Amanda Lossef will represent the District in the WIM Ruth Haring National Tournament of Girls State Champions (formerly the National Girls Invitational Tournament). 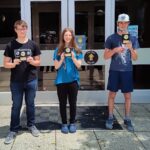 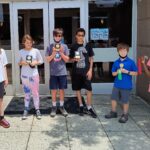 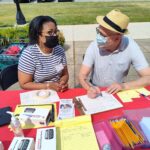 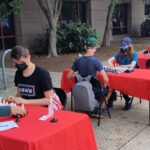 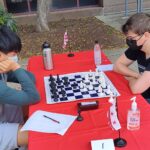 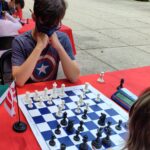 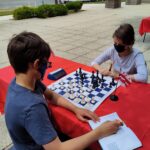 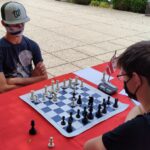 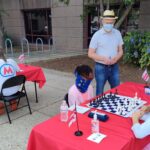 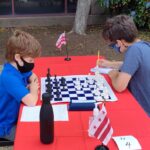 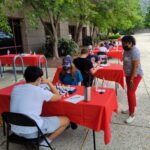 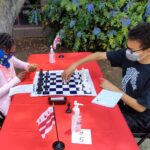 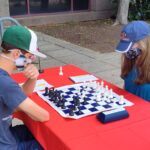 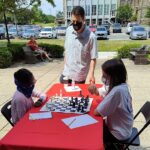 These are a few of the games played (click the board to view the game at Lichess):

Zach was in time trouble and in the scramble lost.

Congratulations to DC International School for their victory in the Spring 2021 PCSAA Middle School Chess League.  Saturday, May 15 was the final Match Day (Rounds 13 & 14) and DCI dominated yet again, maintaining the lead they established at the start of the season, and securing victory with 13.5 match points.  DCI almost achieved a perfect record, but BASIS DC, our second place team with 11 match points, fought DCI to a draw in Round 12 last week.

Imagine Hope edged out Howard University for third place, despite both teams having 8 match points.  The decision came down to the tie-breaker of board points (Imagine Hope had 31 to HU-MS²’s 28 board points).

Thank you to all the teams, students, and coaches!  We hope to see all the teams return in the Fall for a new season. 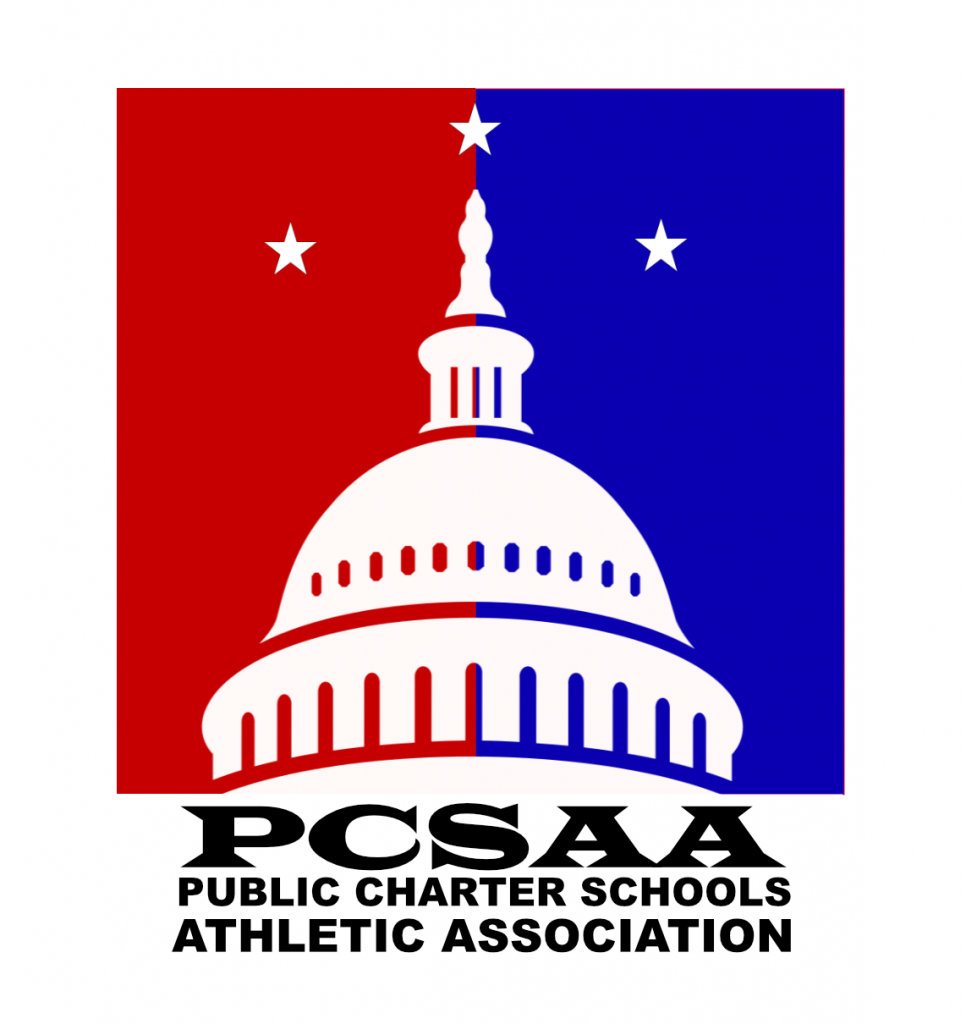 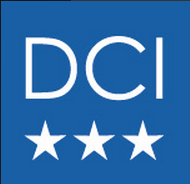 Woman Grandmaster (WGM) Jennifer Yu, the 2019 US Women’s Champion, spent time with our Sunday Chess group on May 16, answering students’ questions and playing a consultation game with them. Jennifer spoke about her training for tournaments, her expectations of playing chess indefinitely but not making it her career, and her passion for doing the best she can.  Watch some of the Q&A here:

After chatting with the students, WGM Yu played a consultation game with them.  In a consultation game, a group (in this case the US Chess Center’s Sunday Chess students) plays collectively, discussing and determining each move together as a team.

Nearly three hours later, the match resulted in a draw.  Watch each move in the match on Lichess here: https://lichess.org/kl7LM8LG#1

Thank you to WGM Yu for spending a Sunday afternoon with our students! 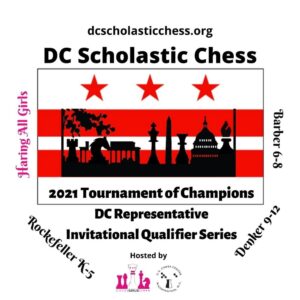 This Saturday, May 22, 2021 at 9:30 am ET, the qualifiers for the Denker (grades 9-12) and Barber (grades 6-8) Tournaments of Champions will be held outdoors at Catholic University’s Edward J. Pryzbyla Center (on the patio), weather permitting.

PRE-REGISTRATION IS REQUIRED (walk-ups will not be permitted).

All competitors must also be members of the US Chess Federation to play, and due to COVID-19 and space restrictions, each category (students in grades 6-8 for the Barber, grades 9-12 for the Denker) is limited to a maximum of 16 players. Masks will be required at all times during the tournament or you will be asked to leave and will be disqualified. No exceptions.

For more information, or to register, please visit: https://dcscholasticchess.org/tournaments

The inaugural season of the DC Public Charter High School chess league concluded on Tuesday, May 11th, and went well. Among three teams it was close throughout, and Somerset is ready to be competitive in the fall.

In the fall, we will be re-launching the Metro Area Chess League (MACL) for all interested high schools in the DC metropolitan area.  The 2021-2022 MACL season will begin in mid-November 2021 and conclude with play-offs at the end of March 2022.  Schools that want to participate should send us a note at:  hs-league@chessctr.org

We also welcome high school students to our Sunday Chess class.  Registration for the Fall 2021 session will begin in late August 2021.

Saturday, May 8 was the penultimate Match Day (Rounds 11 & 12) of the Spring 2021 PCSAA Middle School Chess League.  One more Match Day to go!

DC International School maintains their lead in first place and will face Howard University and Imagine Hope in the final two rounds on Match Day 7.  Both schools could present a challenge, but DCI just needs one more match point to insure their overall victory.  Meanwhile, our second place stalwart, BASIS DC, needs strong victories against both of their Round 13 & 14 rivals (Howard University and E.L. Haynes, respectively) and for DCI to endure their first two outright losses.  Anything could happen!

Yet, the fiercest competition of the Spring 2021 PCSAA League continues in the fight for third place with Imagine Hope and Howard University continuing their rivalry.  Both are still in strong contention, but Howard University has the more challenging schedule to overcome as they face our two current leaders, DCI and BASIS DC, in the final rounds.

Good luck to all the schools and players! 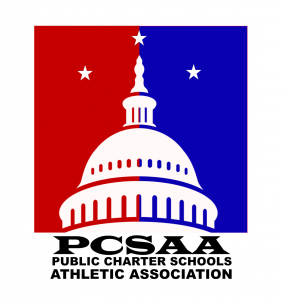 The seeds of my love of teaching were planted in college — not because I had inspirational professors, but through my experiences as a founder of the Pail & Shovel Party. (Google it. I was gone by the time the flamingos landed and the Statue of Liberty arrived, but was involved with the conceptual stage.) Pail & Shovel taught me that anything can be turned into entertainment, entertainment holds people’s attention, and through that attention, education takes place.

During the lead-up to the 1972 Fischer-Spassky match I first became a chess teacher. I was a decent player devoid of teaching experience but after a while found ways to impart the rules and strategy of the game to kids who quickly passed me in skill. 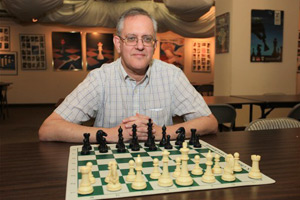 After college, I became a high school classroom teacher with classes in social studies and math. I was the fun teacher in a conservative Catholic school, but always had the goal of getting students to think. When struggling students came to me for additional help, I taught them to play chess and watched as their intellectual self-confidence rose. Inner-city teens who had heard throughout their lifetimes that they would not be able to succeed academically learned that was a lie. If they could play chess, they could do math and understand literature.

During my practice of law, I brought chess to underserved schools, working to convince small children that there was magic in the pieces of plastic they moved around the square board. As they assimilated abstract concepts, their smiles of understanding were more satisfying than favorable verdicts in courtrooms. 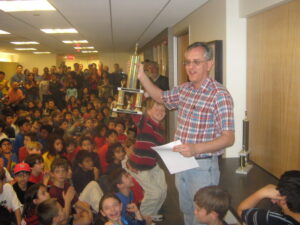 When then-World Chess Champion Garry Kasparov asked me to teach chess for a couple of weeks to children who lived in public housing, that was the start of something quite wonderful. The Washington Post editorial noting the value of chess garnered the attention of people who helped create what has become the U.S. Chess Center. I stopped taking new legal clients and never looked back.

First and second place remain the same from last week with DC International School and BASIS DC comfortable in their positions. The intense struggle for third place continues, however, with Howard University Middle School for Mathematics and Science and Imagine Hope Community Charter School separated by only .5 match points (and .5 board points, too).  With two match days (or 4 rounds) still to go anything could happen.

DC International School held onto their lead and has pulled away from BASIS DC.  Howard University Middle School for Mathematics and Science and Imagine Hope Community Charter School continue their fierce battle for third place.  Meanwhile, Statesmen College Preparatory Academy For Boys made big gains — moving up two places.  We might be seeing the start of a Statesmen surge!

"Brown uses the game to teach kids about choices and thinking before they make a decision [... Brown says] there are parallels between #chess and life that make it a good teaching tool" We agree! Here's a pic of our Founder, Mr. Mehler, & Brown years ago. https://www.salisburypost.com/2021/07/22/using-chess-eugene-brown-visits-power-cross-to-show-kids-importance-of-making-right-decisions/

We just added over 200 more books and magazines to our used #chess books sale. Peruse our inventory here: https://chessctr.org/usedbooks/ We can ship, or you can pick-up from our Silver Spring, MD office. Proceeds support our charitable mission.

"Some upstanding citizen was just throwing large chess pieces off the Roof of Senate Square." https://www.popville.com/2018/07/it-is-a-frustrating-game/

We just added over 100 more books to our used #chess books sale. Peruse the list here: https://bit.ly/uscc-usedbooks or on our Libib shelf: https://uschesscenter.libib.com/