Theophilus Augustus Thompson, the first African-American chessplayer that we know of whose games have survived, was born into slavery in Frederick, Maryland, in 1855.  After emancipation, he worked as a domestic servant in the home of William Higgins, a town constable in Ward 6 of the city of Frederick.  Thompson’s interest in chess was sparked in spring of 1872 when he observed John Hanshew, a neighbor of Higgins, playing a game with another house guest.  The young man’s instant intrigue for the game is chronicled in the forward to the book of problems he later published, which says that although he “dared not ask questions for fear of annoying the players, he watched every move with the closest attention.”

After Hanshew loaned Thompson a chess board and a set of problems to solve, he quickly learned the game and started competing against local players, both in person and via correspondence (in which the two players send moves one at a time by mail).  But it was as a chess problem composer that Thompson attracted his greatest acclaim.  After making short work of the problems Hanshew had given him, Thompson began composing problems of his own.  He contributed individual checkmate puzzles to chess periodicals before publishing his own anthology, Chess Problems: Either to Play and Mate, in 1873, just one year after learning the rules of the game.

Thompson’s accomplishments were remarkable not just because of the circumstances of his birth, but also his relative youth.  In the nineteenth century, with the noted exception of Paul Morphy, there were very few players who made any significant mark in the chess world before turning twenty.  Not only did Thompson win games against seasoned adult competition while still a teenager, but with the release of his book in 1873, he may have been the youngest published chess writer at the time.  His talents attracted recognition as far away as London, where the City of London Chess Review Magazine praised a puzzle from his book as “one of the most beautiful compositions that ever came before our notice.”
Not much was known about Thompson’s life after the publication of his book until the recent discovery of his death notice in the archives of the Frederick Examiner.  His obituary explains that he worked as a schoolteacher in the city of Frederick and suffered for many years from tuberculosis before passing away from the disease in October 1881, aged 26.  His former mentor, John Hanshew, had died of the same disease two years earlier.
The fact that only a couple of Thompson’s problems, and none of his games, are dated from any later than 1875 suggests that the tuberculosis affected his ability to fully apply himself to chess in the last few years of his life.  But although Thompson was one of many nineteenth century chess figures whose promising career was cut short by poor health, we have clear evidence of his talent from the surviving records of his games and problems. 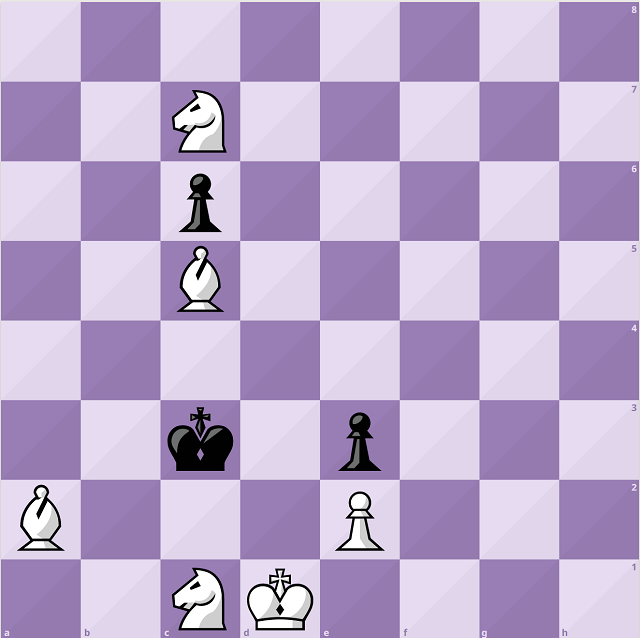 To the left: one of the problems from Thompson’s book.  White, to move, mates in three turns.  How do we finish the mating net?

(The answer is at the bottom of the page!)

All of Thompson’s surviving game scores that we know of are presented in PGN format here.

Thompson’s published anthology of problems is available for public viewing on Google Books.

We are in the process of converting the problems in Thompson’s book, plus the problems he published in other chess periodicals during his lifetime, into FEN format for quicker, easier viewing.

“An Elusive Kinetic Portrait,” a wind-rotating sculpture by Margot de Messieres and Tsvetomir Naydenov, honors Thompson’s life.  The sculpture [video] is located a few blocks away from Ice Street in Frederick, where Thompson resided at the time of his death.