The 2022 U.S. Chess Championships have concluded in St. Louis.  A day after Fabiano Caruana won the open section of the championship, U.S. Chess Center honorary co-chair Jennifer Yu won the women’s championship for the second time, following on from her win in 2019.   Congratulations to both the winners!

Jennifer Yu’s victory in particular is a testament to one of the most fundamental values we espouse at the U.S. Chess Center: the value of not giving up.  Going into the late stages of the tournament, Jennifer led her closest opponent, eight-time U.S. Women’s Champion Irina Krush, before losing their individual matchup in Round 12 to fall half a point behind her in the standings.  Undeterred by the loss of that game, Jennifer battled back to win in Round 13 whereas Irina could only draw.  This forged a tie for first place and ensured that the championship title would be settled the following day with tiebreak games at a faster time control. 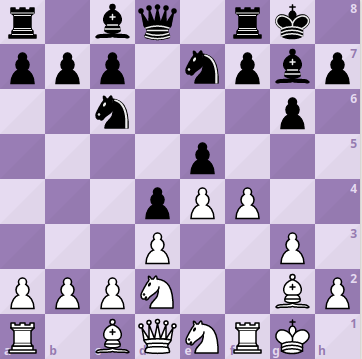 Diagrammed here is a position during the opening of the decisive game of that tiebreak match, with both competitors knowing that the winner of this game would be the new champion.  Jennifer, as Black, made an uncharacteristically big error with 9…Bg4, hanging the bishop, which Irina quickly took on the next move with 10. Qxg4.  In tournament games, it’s sadly common for players to resign after making a mistake like this. Facing the prospect of playing on down a piece against a player as strong as Irina Krush, perhaps to some players it would seem less unpleasant to just give up.  But Jennifer chose to play on and keep trying her hardest, and what happened later on is a testament to the merits of doing exactly that. 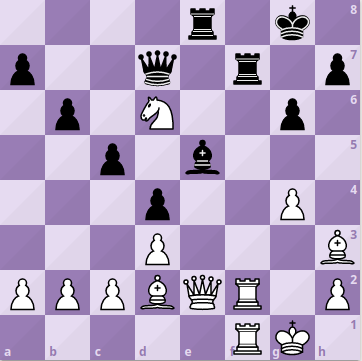 The players eventually reached the position in the second diagram on the left.  Irina, still ahead by a piece, had just taken Black’s knight, 22. Nxd6.  But instead of recapturing right away, Jennifer combined an in-between move (zwischenzug) with a discovered attack: 22…Bxh2+ 23. Kxh2 Qxd6+ 24. Kh1 Rxe2 25. Rxe2.  After the tactics, Black ended up with a queen and pawn in exchange for White’s two bishops and rook – still a material advantage for White, but a position with the kings exposed like this tends to create tactical chances for the side with the queen, and Irina felt compelled to use a lot of time on the clock.

White’s time ultimately ran out after the 47th move, giving Jennifer the win in the game and the championship.  The lesson to our students, as always – don’t quit, because until the two players shake hands to end the game, no outcome is guaranteed.

Register now for Sessions 2-6 of Saturday #Chess Kids: https://chessctr.org/chesskids/ Classes are held on four select Saturdays each session from 10-11:30am in Silver Spring, MD. Chess kids is for grades K-6 and all levels are welcome. Through Chess Kids, we make learning chess fun!