Fifty years ago today, Boris Spassky resigned the 21st and final game of his match with Bobby Fischer, making Fischer the World Chess Champion.  Fischer’s rise to the top had long been a story that transcended the world of chess, and the Cold War undertones ensured that the 1972 championship match in Reykjavik would be the most followed chess competition in history.  His PBS coverage of the match made Shelby Lyman a household name in America, and the PBS coverage of the match had higher ratings than the commercial broadcasts competing against it.

The image of the self-taught Fischer, working alone against the Soviet Union’s combined force of world-class coaches and players who helped Spassky prepare, fueled the narrative of the triumph of individual brilliance over collectivism.  No player outside the USSR had even qualified for a championship match since the end of World War II, so his title win was an improbable underdog story as much as it was the tale of a generational talent realizing his potential. Although Fischer’s run to the World Championship included a string of twenty wins in a row against world-class players (even today the closest any player has come to that record is eight straight wins), Fischer had failed to win any of the five games he had previously played against Spassky so there were plenty of doubts about his ability to defeat him in a match.

It also caused a surge of popularity for chess in the Western world, and in the United States in particular.  Sales of chess sets reportedly climbed more than 20 percent in the wake of the 1972 match, and tournament participation ticked up as more Americans were drawn to learn the game to better identify with Fischer’s genius. It was that year that David Mehler, the founder of the U.S. Chess Center, first taught chess to people who wanted to know what all the fuss was about. 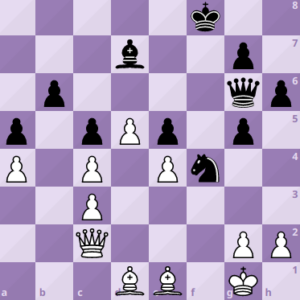 Spassky took an early lead in the 1972 match, after an infamous blunder by Fischer in the first game and an even more infamous forfeit in the second game.  Fischer then won the third game, his first-ever win against Spassky, and after a draw in game 4 the two players reached the position on the left in game 5.  It was Fischer’s (Black’s) turn to move here.  What is the best move?

The answer is at the bottom of the page!

The events of 1972 secured Fischer an iconic legacy in the history of chess.  The events after 1972 ensured that that legacy would be a complicated one.  It is saddening to recount how Fischer tarnished his personal reputation with his abhorrent public statements. And the chess element of Fischer’s life story following his win in Iceland is also disheartening to retell, because the 50th anniversary of Fischer winning the title is also the 50th anniversary of his departure from competitive play.  After that 1972 match victory, Fischer became a recluse for 20 years.  He declined to compete in any tournaments, turning down what would have added up to millions of dollars in endorsements and appearance fees, and he refused terms for any future world championship matches and forfeited the title three years after winning it.

For Fischer, giving up chess meant not only vanishing from the public’s eye, but also disappearing from the lives of nearly everyone he had met during his years as a chessplayer.  He resurfaced only briefly in 1992 for another, unofficial, match against Spassky, who at that point was no longer a contender for the world championship.  By playing that match in war-torn Yugoslavia in possible violation of international sanctions, Fischer became the subject of a U.S.-issued arrest warrant. Fischer never returned to the United States, nor did he ever play a public game of chess again after winning the second match against Spassky. He eventually received political asylum in Iceland, where he died in 2008.

As much as we may take inspiration from Bobby Fischer’s immense talent and try to follow the examples Fischer set with the strategies and tactics he used to win his games, we implore young people to not have the same approach to the game that Fischer had.  We want our students, whether or not they become top-class players, to be interested in playing chess and to sustain that interest for their entire lives, because that is more satisfying than becoming world champion and leaving the game before turning thirty. Don’t set out on a chessplaying journey with the sole goal of achieving a specific rating or attaining a specific title – even if it is the world championship title.  Instead, play to improve your skills, play to make new friends, and play for the fun of playing.

Solution to the above puzzle: Fischer won with 27…Bxa5.  If 28. Qxa4 Qxe4 quickly forces mate, due to the dual threats of Qxe1# and Qxg2#.  If White moves the queen to b1, c1 or d2, Fischer would have continued 28…Bxd1 29. Qxd1 Qxe4 30. Qd2 Nxg2 and he is three pawns ahead, so Spassky resigned.  After drawing level by winning game 5, Fischer then immediately won game 6 to take the lead of the match, a lead he would never relinquish.